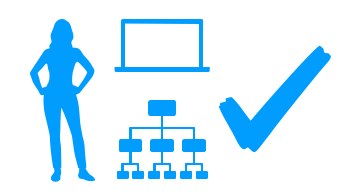 Is just one of the things an IT Solutions company in Catterick said to me during an interview.

To start at the beginning! In August 2012 I had an operation to fuse 2 of my vertebrae in my lower back and insert some ‘scaffolding’ to support the once above due to collapsed discs. I knew the operation was coming and had decided that once I could go back to work it would be in IT. I was not going to settle for less, having always enjoyed dabbling in IT and taking PCs, Xboxes and mobile phones apart to fix or clean them it seemed like a logical choice. Getting into Information Security was the ultimate goal but I needed to start with IT in general.

“An apprenticeship! that’s what I’ll do” I told my husband. So I started to apply for any IT apprenticeships I could find, sometimes 5-10 per week and then….. Nothing! Nothing at all. Not even a ‘sorry this place was filled’. I kept going and did, now and again, receive a reply, TOO OLD! You see I was 34. When a company wants an apprentice they want a young one so that they will be fully funded. I still kept going. Applying and chasing with telephone calls. Too old.

But then finally, an interview!

It was for a Network Technician Apprentice role for an IT solutions company in Catterick. I was currently living in Bishop Auckland and was more than happy to travel 25 miles to work each day.

On the day of the interview, I was extremely nervous and also excited at the possibility, this could be it…. The beginning. I arrived in plenty of time and smartly dressed with a little makeup on and hair done, anxious to meet with my interviewers.

Now I can tell you that when someone walks into the room, sees you, and their face drops, you do not get a good feeling, that sinking feeling. That feeling of dread. I was asked to have a seat and was made a cup of coffee. The interview started in an unstructured way and I remember being asked why I wanted the role. “Since leaving school I have wanted to get into IT but just didn’t know how back then. I have had a few years away from work due to a back injury but am now able to work again and decided to go for my career of choice” I said some other stuff and waited for a response. Awkward silence. Then one of the men said, “I just can’t understand why a woman with a family would want a job like this, it gets cold in server rooms you know”. I said I would wear a coat if I was cold. This seemed to be the theme of the interview and I was enlightened with some interesting statistics about how many women worked in IT or rather didn’t work in IT. On the plus side, I was told that the clients would love me although I’m not entirely sure that it was meant as a compliment. Near the end, I was asked if I would not rather take a position in admin! As a last attempt to convince these people (clutching at straws) I blurted out that having my hair done and wearing makeup was not me and I really wanted this opportunity. After I left it didn’t take long for the recruiter to ring to break the news to me, I was not experienced or knowledgeable enough for the position and the learning curve would be too steep, an interesting point considering that the interviewers had already told me that the role needed no experience being an apprentice role and that the last apprentice they had was completely starting from scratch with their knowledge and experience.

Desperately wanting to prove myself I emailed one of the directors that interviewed me and offered to do voluntary work so that they could see my work ethic and how quickly I would pick things up. Nothing! Not a thing back.

I was absolutely determined to keep going, everything happens for a reason right? and looking back at the interview I was beginning to think that maybe it was not the best place to work, for a woman anyway.

Thank you! Thank you so much for not taking me on! I would not be where I am today if you had.

After around 8 months of applying, I had an interview with Newcastle College which was successful and my journey began, but that is another story.

The point of telling you this is to say never give up on your dream career and never stop searching for your perfect employer. You’ll know when you get there and you may not stay forever but it’ll be right at the time.

I am so lucky to have found a company that not only let me fly, they give me wind beneath my wings. Thank you SRM!

How US internet giants are tackling the issue of GDPR compliance

What does GDPR mean to SMEs?